In our January 2020 market update, we urged everyone to protect their retirement savings by reducing the exposure to stocks, and placing stop-loss orders on all Equity Holdings. And, having a minimum of 20% of your retirement savings in Financial Insurance-Gold and Silver – for profits and protection. To review our January Report please click on the link bellow.

In just 22 days, we’ve seen the fastest S&P 500 crash ever of at least 30%. You have to go all the way back to the 1929 catastrophe and the ensuing Great Depression to find anything close to what we’re currently witnessing, which is now officially unprecedented. Last week in our email alert, we said that gold and silver are doing one Last big pull back before soaring to new record highs. As people sell everything they can to come up with cash. And this is exactly what’s happened.

As the global coronavirus pandemic early this week goes from bad to worse from a world markets and economic perspective, gold and silver markets have sold off sharply because traders “can” sell them. Traders of U.S. stock index futures can’t sell as of this writing because they are untradable and locked down the daily trading limits. The safe-haven status of gold and silver markets is temporarily on hold as margin calls in stocks and stock index futures are prompting many, many traders to throw up their hands and liquidate the trading positions they can, in order to stay solvent.

Of course, what’s happened to gold and silver is not new. There have been many periods in history where they have experienced dramatic short-term price corrections. The reasons vary, as does the severity and duration.

However, the thing to be aware of is that they always recovered.. And then went on to soar to new highs within the next 2-3 years. The only issue is how long the process took and how high they ultimately went.

The worst of the stock market crash occurred in October 2008. Gold and silver fell hard then too, largely for the same reasons as now, a desperate need for liquidity.

The gold price lost almost a third of its value in seven short months.

Silver’s price was cut by over half, again in just seven months.

But those declines set up spectacular returns. Here’s what happened next. 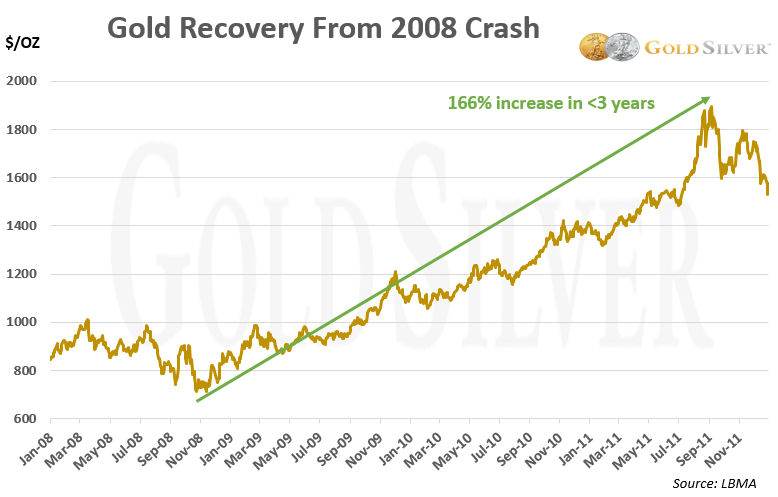 The price rose 166% in just under three years.

Silver did even better. 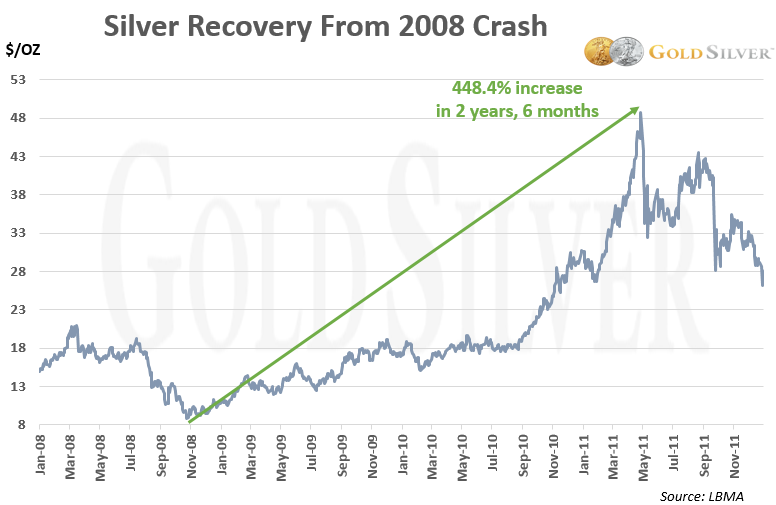 The price climbed 448% in two-and-half years.

But the selloff didn’t last and the reversals were huge.

The 1970s decade was tumultuous.

Gold bottomed in late summer 1976. Then this happened. 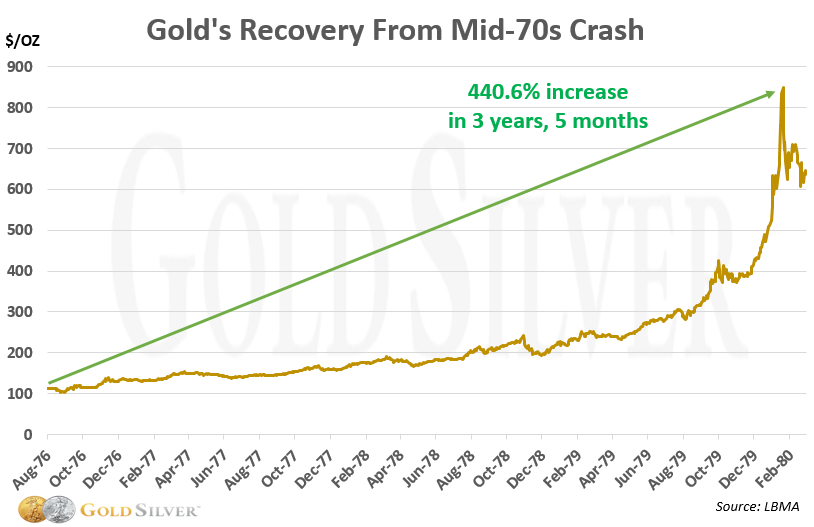 Here’s how silver performed after recovering from its correction. 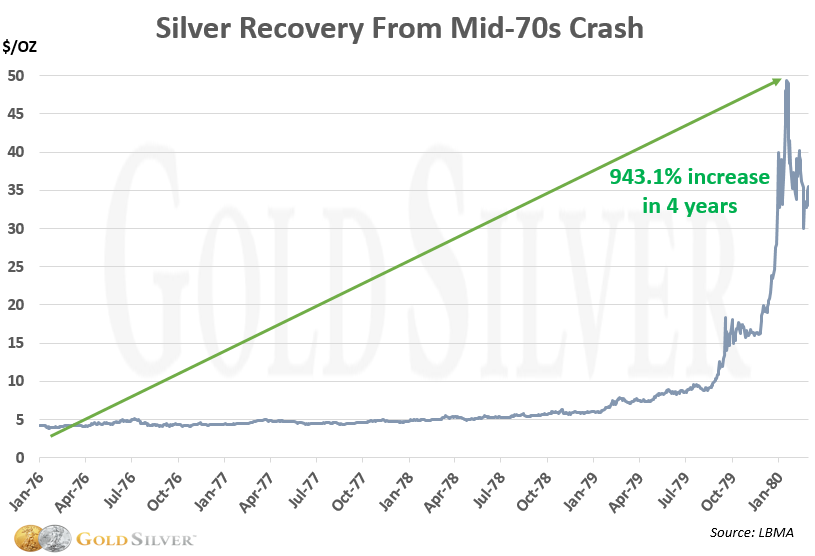 The price rose 943% over a period of about four years.

The lesson here is similar to the 2008-2011 period. Precious metals declined in the initial shock to the economy and markets. But they rebounded spectacularly as more and more investors sought them out as a safe haven. Those who held on after the initial correction were handsomely rewarded.

“The current retracement in the gold price is an enormous opportunity for traders to get back in the game or add to their position, similar to the institutions.” – Forbes

The federal debt was already colossal. Over 23 trillion and climbing. And in the wake of the coronavirus pandemic, it’s going to absolutely explode.

As all that paper money works its way through the financial system, it will send precious metals prices soaring.

This unprecedented money-printing will push gold to new highs. Gold will trade for $2,500 an ounce in the not-too-distant future, and silver over $60 oz. Remember, the S&P 500 and precious metals were down in the first few months [of the 2008 crash) gold & silver then went on to soar reaching new highs by 2011.

After the 2008 mortgage crisis the Federal Reserve printed $4 trillion dollars, resulting in gold and silver hitting new highs within 2 years. And now with the Corona virus pandemic, the Federal Reserve is already printing trillions of new dollars in order to offset the economic damaged it’s caused. 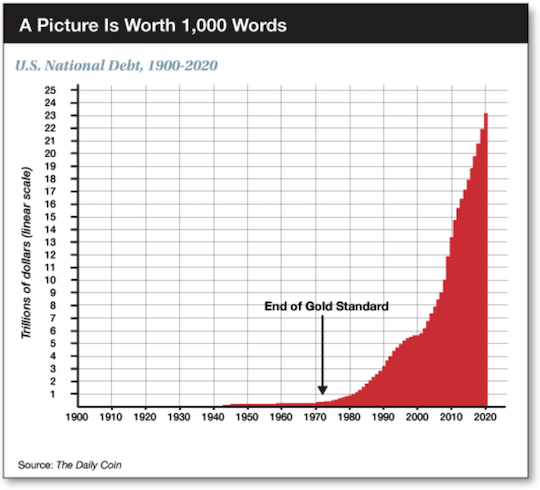 Larry Kudlow, director of the National Economic Council, Tuesday, announced 6 trillion dollars of new money printing!  $4 trillion dollars in “liquidity” from the Federal Reserve and $2 trillion in spending from the U.S. Treasury. This monumental bailout will devalue each and every dollar you own in the coming months and years ahead.

The deficits are going to be enormous. During the financial crisis, in 2008 the government had to bail out the banks, but now because of the impact of the virus, they are going to have to bail out everyone. All the money being thrown into the system, like in 2008, will send precious metals exponentially higher.

And, with silver selling at the largest discount to Gold ever, this is indeed a once-in-a-lifetime opportunity to safely grow your wealth.

Incredibly, the gold to silver ratio just reached an astonishing 120 to 1…The highest level ever recorded during 6,000 years of human history! And soon, the ratio will reverse with a vengeance and the gains will truly be life changing.

Classic American coins, minted before 1933 are the safest and most profitable way to take advantage of the historic lows in gold & silver. Because of their limited quantities they have built-in leverage and can rise 2 to 3 times faster than bullion alone. Best of all, they’re comparably priced with modern bullion coins, yet offer historic and numismatic value that bullion coins cannot match.

But, precious metal demand is now at its highest level since 2008. And classic American gold & silver coins are scarce at these levels. Premiums have surged 400% on some coins already!

Silver is selling at the lowest price ever, compared to gold. Click the link below to learn how to turn $15k into $47,000 in 2 years with No risk.

Don’t delay. A massive dollar devaluation is coming soon. And anyone who doesn’t protect their retirement savings now, is jeopardizing every penny of their wealth. That leaves you with only two choices…you can take advantage of this once-in-a-lifetime opportunity to grow your retirement savings. Or do nothing and watch your wealth decline as paper currency loses its purchasing power. We encourage you to ake action now…It could be the most profitable decision you make.

As the top rated wealth management company in the nation 🏆 Our unique and innovative investment strategies provide capital appreciation, preservation, privacy and protection. We offer exclusive opportunities for Investors and savers to safely grow their wealth.

You receiving this email because you opted in at our website Godshonestmoney.com.