Cantankerous, divisive, even violent—choose your adjective, but the upcoming US election is on a level we haven’t seen in a generation.

Who wins? Well, believe it or not, we already know the answer…

“History shows that Democrats will impoverish us all with high taxes, social spending, regulatory interference, and Biden vows to implement lots more of all three. But, neither candidate shows any signs of stemming the cancerous growth of the federal debt and deficit. And the cost of unleashed inflation – loss of the U.S. dollar as the international reserve currency, and subsequent steep devaluation – may make the cost of higher taxes look trivial.” – Economist P. J. O’ Rourke

Politicians from both parties are spendthrifts. That’s why our national debt hit $27 trillion earlier this month. The same assets that did well in the inflationary 1970s: Health care, food, energy, utilities and precious metals… Are going to be portfolio protectors & wealth builders in the 2020’s.

Democrats would repeal tax cuts, increase regulations & deficit spending. This would be a disaster for the U.S. economy. That’s why many experts expect a stock market crash, if they are elected on November 3rd.

President Trump’s victory will be bullish for gold too, as it would be a continuation of the trade wars, budget deficits and geopolitical uncertainty. The chart below indicates, gold saw about 50-percent gain during Trump’s presidency. 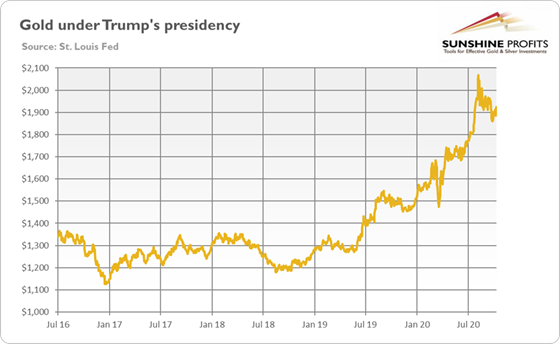 So, no matter who wins the election, the price of gold is going dramatically higher. The reason is simple… The Federal Reserve is committed to printing unlimited amounts of fiat money ( U.S. Dollars) to prevent the economy from plunging into a recession. We’ve already had the largest money-printing binge in U.S. history in 2020, under a conservative Republican president. If a socialist Democrat is elected, the amount of money printed so far, will pale in comparison to what’s coming next.

There has never been a greater disconnect between stock prices and earnings. Equity values are now 100% dependent on federal reserve money printing, not earnings. The massive amount of fiscal stimulus has hyper-inflated the stock and bond market, creating the largest financial bubble in American history. Sooner or later All bubbles burst. Maybe on November 4th if Democrats take office?

Today gold is $1,875 an ounce and the Dow is 26,300. So, a massive realignment in asset prices is coming. Gold will be substantially higher & the stock market will be significantly lower. And, there’s never been a better time to reposition your money out of the risky stock market, into the safety of gold and silver.

The U.S. dollar devaluation has began, debasing the value your retirement- savings.

The laws of Economics are fixed. Of course, the Federal Reserve can manipulate them temporarily. But, ultimately the consequences of printing trillions of dollars will result in massive currency devaluation & the value of tangible Investments, like gold and silver to Skyrocket.

Bottom line: The value of each and every dollar you own, are going to be worth substantially less. And only those who prepare now, will see extraordinary gains during the next 4 years, no matter who is in office.

For 5,000 years gold & silver have been the most sought-after form of asset protection & the ultimate Safe Haven during times of uncertainty. They can’t be debased by governments who print paper money at will, making their currency worth less every year.

“In the absence of the gold standard, there is no way to protect savings from confiscation through inflation. There is no safe store of value. Gold is a currency. It is still, by all evidence, a premier currency, where no fiat currency, including the dollar, can match it.” – Federal Reserve Chairman, Alan Greenspan ( 1987-2006 )
The fundamental reasons to own gold at this time in history are critical.

“Be greedy when others are fearful and fearful when others are greedy.” – Warren Buffett.
Be fearful of a Stock Market trading at dangerous multiples of earnings. And be greedy of tangible Investments (gold & silver) trading at a fraction of their true value.

Since gold became legal to own again in the United States in 1972. There have been 2 major Bull markets. Gold soared 665% and 1,095%. The 3rd bull market in Gold began in 2018. This presents investors and savers with an extraordinary opportunity to safely grow wealth in the coming years.

The last thing you should do right now is to let fear or uncertainty prevent you from taking advantage of what history tells us could be the greatest money-making opportunity of our lifetime.