Are You Ready For 25% Inflation?

Today, inflation is climbing at the fastest pace we’ve seen in 30 years.

Wharton finance professor Jeremy Siegel says, “Inflation, in general, is going to be a much bigger problem than the Fed believes!” Speaking at a Forbes advisor summit last week, Siegel said to expect 20 to 25% inflation over the next few years.

Siegal, who’s known for his positive market forecasts, and correctly predicted the Dow would reach 35,000 in 2021, is sounding the alarm on equities and warned that the U.S. stockmarket is “unprepared for the inflation fallout.” But, is bullish on gold. He believes it has become cheap as an inflation hedge.

Stephen Roach, former Morgan Stanley Asia chair, now at Yale University, reminds us that, “Those who insist this inflation is transitory are singing the same tune the Fed’s choir sang in the 1970’s. Back then the lyrics were all about the OPEC oil embargo and El Niño weather patterns. They were not watching the Fed’s Explosion of Money Creation.”

“Central bankers haven’t a clue about the links between their asset holdings and the forces of supply and demand that are currently wreaking havoc on inflation,” said Roach. “Echoes of an earlier, darker period of economic history are growing louder.”

In that “earlier, darker period,” the 1970s, inflation Averaged 6.8% per year for 10 years. Savers lost 68% of their purchasing power by the end of the decade!

The world’s central banks, including the Federal Reserve, are all aggressively expanding their money supplies through inflation & deficit spending.

In fact, the U.S. national debt has exploded from $8 to $28 trillion dollars. Hyper-inflating the stock, bond and real estate market…Creating the largest financial bubble in history.

And the only available option to service the expanding pile of debt is to keep printing – to prevent the economy from crashing and to avoid default.

In the last 18 months, Washington has spent $5.7 trillion on relief and stimulus packages. Now it wants to spend another $3.5 trillion. And where will that money come from?

They’ll print it, of course. And the value of the dollar and your savings will disappear even faster.

Because, all that cash leads to more dollars chasing the same goods… and that means rising prices.

You can see the dramatic spike in inflation… 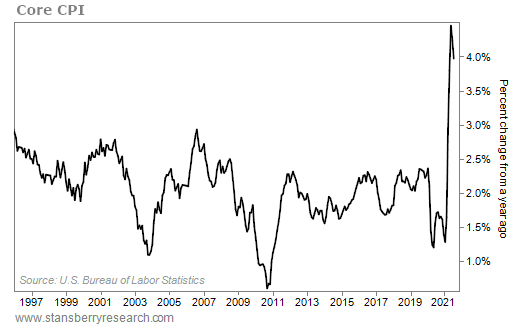 In fact, over the last year the dollar has lost almost 10% of its purchasing power due to currency debasement. That means any cash you have in the bank right now is losing more of its value each day.

Inflation is a “hidden tax” that everyone pays, caused by government overspending and excessive money printing. And Inflation could devastate your retirement by knocking years off your savings… potentially causing you to outlive your money.

That’s why every investor should have a “real-assets bucket” in their portfolios.

When inflation strikes, you want to own hard assets like physical gold & silver.

Gold has been the foundation of wealth and a monetary base for centuries. Providing proven protection from asset bubbles, stock market declines, global economic crisis and currency debasement. (inflation)

Overvalued equity markets, and a monetary system overcome with indebtedness, is not a safe place to entrust your financial future.

It takes years to build up a nest egg that will last you through retirement. And it can take just a few weeks to watch it get cut in half during a market crash.

Everyday, investors and savers make the decision to move away from a declining dollar and the dangers of Wall Street toward the safety of gold.

Gold has maintained value over time better than any other asset on earth. That makes it the best place to store your wealth. It’s value cannot be debased by governments who print paper money at will, making their currency worth less each year.

As one of the top rated wealth management companies in the nation, we can show you how to use the the dollar devaluation to make once-in-a-generation profits & double your retirement-savings by 2023, with a no-risk guarantee.

And help you $ave thousands in taxes on distributions made from IRA and 401K accounts.