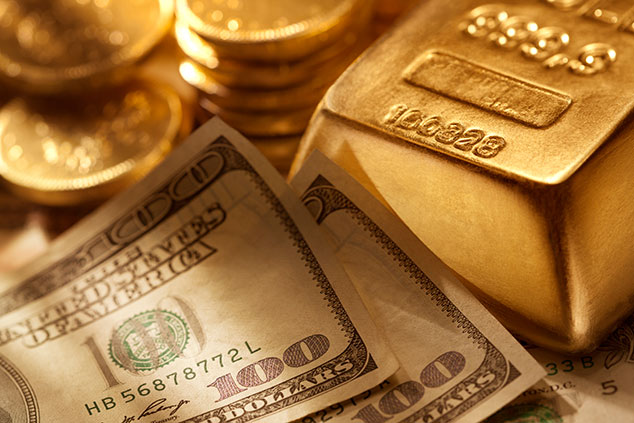 “In the absence of the gold standard there is no way to protect savings from confiscation through inflation. there is no safe store of value.”
– Alan Greenspan Federal Reserve chairman

In 2021 we saw a continuing pandemic, price inflation soaring to it’s highest level since the 1970’s, and a record-breaking stock & real estate market.

But as $timulus ends, bull markets that were induced by fed money printing inevitably collapse as all bubbles do.

Immense global debt growth will result in higher inflation and continue in the coming years. With record-low interest rates in the U.S combined with a colossal ~50% increase to the money supply and a sizeable persistent increase in the Federal spending deficit.

In fact, according to the M2 Money Supply, 40% of all Federal Reserve Notes currently in existence have been printed in the last 24 months!

With all this cheap money flooding the system it’s no surprise that inflation is surging at the fastest rate in nearly 40 years. The consumer price index showed inflation at nearly 7% in 2021.

The core problem for the modern portfolio in 2022 is debasement of the currency.

“Fed Chairman Powell has pumped trillions of newly printed dollars into the system in order to prop up the financial markets, but in the process has unleashed a tsunami of inflation that is unlike anything we have seen since the 1970s.”
– Michael Snyder

To slow inflation, the Federal Reserve is planning rate hikes that take interest rates to 2% by 2024. But, as economist Peter Schiff pointed out…” A 2% interest rate in the face of 7% inflation is like taking a pea shooter to a bazooka fight.

In order to truly cap inflation, the Federal Reserve needs to push interest rates above the level of inflation. But, nobody is talking about rate hikes up to 7%. And the government uses a diluted CPI formula that understates inflation. ( Food and energy prices were removed years ago, along with other key components of the CPI ) When measured honestly, if the annual rate of inflation was still calculated the way it was back in 1980, it would be about 15% right now.

The Fed is in a fight it cannot win. Fed chairman Paul Volker had to take rates to 20% to finally tame the inflation of the 1970’s. That’s certainly not in the plans. It would crush a U.S. economy built on easy money and credit.

In fact, the Fed is severely constrained in how much it can raise rates due to ballooning interest payments to service its nearly $30 trillion national debt.

IF THE FED TIGHTENS TOO HARD, it would launch another 2008 – style credit meltdown. If it fails to tighten sufficiently, it will ignite another 1970s – style stagflationary wildfire.

That’s why many financial experts believe the ‘everything’ bubble will finally burst in 2022.

Renowned economist and best selling author Harry Dent warns, “U.S. stock markets to crash by 90% this year for the S&P 500, not unlike what happened to tech stocks during the Dot Com Bubble bust of 1999.”

Due to the fact that financial assets are in what Dent called the “greatest bubble in history” from over-stimulus by the Federal Reserve.

The greatest financial downturn ever will happen this year, and investors will be taking the “biggest risk of [their] life” if they don’t sell now ahead of a complete market wipeout. The financial asset crash will trigger a recession which is what happened in the 2000 crash,” he said.

The combination of rising inflation, higher interest rates, and a weakening economy will be devasting for the overvalued U.S. equity markets. But, will give gold explosive upside potential.

Of course, the last thing central bankers and their beneficiaries on Wall Street want to see is a massive flight from financial assets into gold and silver. But, market history shows that Fed-fueled asset booms always lead to busts.

Gold moves dramatically higher after the effects of inflation have settled in and have taken their toll – not before and not in anticipation of those effects. We have just started to see the effects of higher product/services and wage inflation.

In the stagflation decade, the 10 year period between 1970 and 1980, gold rose by over 20 times! Imagine how high gold will have to rise this next cycle to catch up.

The #1 ranked Aden Forecast reported, “Demand from central banks is at record, as they are buying more gold than ever before and institutions are buying too, because they see inflation going up significantly. That combined with gold prices at bargain levels now.

Bull Market in early stages. The explosive phase is still to come in the years ahead. Unprecedented amounts of money printing in the last 18 months has never happened before in history, and gold has not yet reflected the effects of this unparalleled monetary policy. But, it will and when it does the price of both gold and silver will soar to unheard of levels.”

Wall street Billionaire Thomas Kaplan says the next gold move is going to be a long wave that lasts for a decade or 15 years, maybe more … I think that you really are looking at a complete paradigm shift that will make gold the generational trade.” From there, Kaplan goes on to say that gold will reach $3,000 to $5,000 in the years to come. 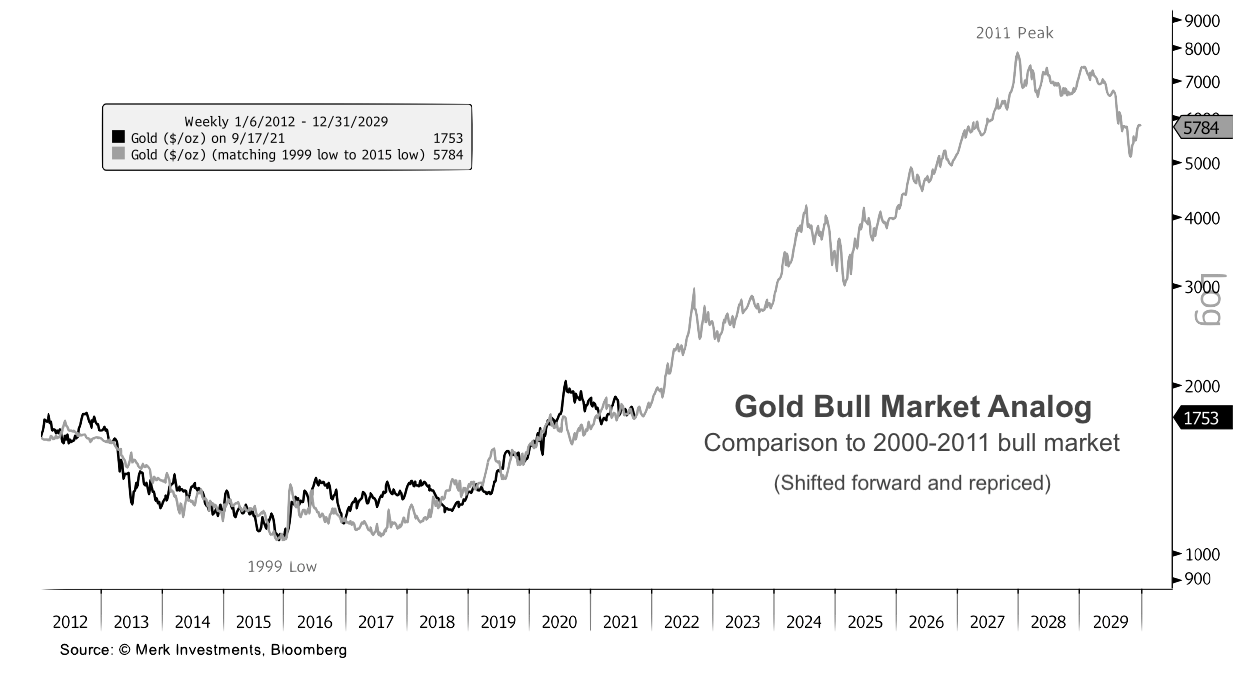 This will be a decade defined by high inflation and a failed attempt to raise rates – the perfect combo to trigger a massive rally in gold, said commodity experts Goehring & Rozencwajg Associate’s.

This year, inflation could already be pushing 9%, and it could get a lot worse, Goehring told Kitco News in an interview.

“We’re getting closer to the explosion of gold prices to the upside. I’m a big believer that inflation is not going away. It’s going to continue to be a problem.”

How big of a bull market will it be? Goehring is expecting gold to reach $10,000 an ounce by the end of the decade. And for silver to eventually catch up and trade around $500 an ounce.

Precious metals are a safe, sound and practical means of preserving and increasing wealth. A time tested investment during these unsure times, just as they have been for thousands of years.

Gold & silver are forms of hard money. No other commodity or collectible serves that unique function.

Most investments related to hard assets, including base metals, energy, and real estate, are economically sensitive – meaning they tend to get pulled down when the economy and stock market head south.

Gold shows virtually no correlation with the business cycle and can move in the opposite direction of conventional asset markets.

The pendulum of investor sentiment will inevitably, swing away from the stock market and its sky-high valuations. It will swing toward safe havens, toward hard assets, and ultimately toward hard money.

The chart below shows more than a half-century of the declining purchasing power of the dollar in green and the rising price of gold. 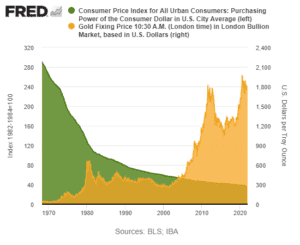 Gold has increased 58 times in value over the last half-century, while the U.S. dollar has lost over 90% of its purchasing power.

The time-tested asset that protects your savings against market calamity and dollar devaluation is physical gold and silver.

Gold has been the foundation of wealth and a monetary base for centuries. It has maintained value over time better than any other asset on earth. That makes it the best place to store your wealth.

Gold is the only true safe harbor for your investments, and should be a major part of every investors portfolio. It is a necessity for wealth preservation during periods of monetary instability.

And increasing political unrest and economic instability throughout the world, will emphasize a greater need for financial security.

So, there is one critical move that every investor must make, to not only survive, but also thrive in 2022…

Since 1929 there have been 20 major stock market crashes, about 1 every 5 years, with an average fall of 36%. In each case gold has held its value or increased greatly. It is dangerous to buy risk assets such as stocks at artificially inflated valuations. It is especially dangerous to own false safe havens such as bonds when their yields are so low that they are guaranteed to deliver negative real returns. Overvalued equity markets, and a monetary system overcome with indebtedness, is not a safe place to entrust your financial future.

Gold and silver’s annualized gains throughout the inflationary 1970’s were over 30%, and in the aftermath of the 2008 financial crisis gold nearly tripled, while silver more than quintupled! Never forget, anything denominated in dollars (stocks, bonds, CD’s) loses value with each passing month. And unlike paper Investments (stocks, bonds and currencies) that can become worthless overnight. Gold & silver have true intrinsic value. They cannot be debased by governments who print paper money at will, making their currency worth less each year.

In 2022 the stock market may get cut in half and your money in the bank will lose much of its value. ( inflation ) But, gold will continue to protect and grow your wealth as it has for 5,000 years.

Everyday investors and savers make a decision to move away from the declining dollar and the dangers of Wall Street toward the safety of gold.

Since 1982, Liberty Financial has helped thousands of Americans secure their financial future by rolling over their IRA/401K’s, out of the risky stock market into tangible Investments, that provide a safe and predictable way to build wealth and protect retirement-savings.

As one of the top rated wealth management companies in the nation, we can show you how to use the the dollar devaluation to make once-in-a-generation profits & build your retirement-savings with a no-risk guarantee.

And help you $ave thousands in taxes on distributions made from IRA and 401K accounts.

Liberty Financial has the best values, most profitable advice and an exclusive no-risk guarantee, making us the wise choice in Tangible Investing. 🗽