Silver outperformed gold last year, and has so far this year, too. The gold-silver ratio has fallen from 123 last March to 64 today. Silver’s 12-month performance is also strong, up about 60% since last February 28.

And yet, silver remains one of the most undervalued investments that can be bought today.

Regardless of what asset class you compare it to, silver offers better value to investors right now than anything else.

That’s because it is one of a few assets that are still priced below their 1980 high. An asset should obviously appreciate in price over a 41-year period—especially one with monetary qualities—but at this moment in time, silver has not.

The following charts will show just how undervalued silver truly is…

Silver vs. the Investment World

The following tables list each asset’s highest price in 1980, the high so far in 2021, and then the percent gain or loss over this 41 year period. Let’s start with the metals. Check out how much each metal has gained since 1980 – except silver. 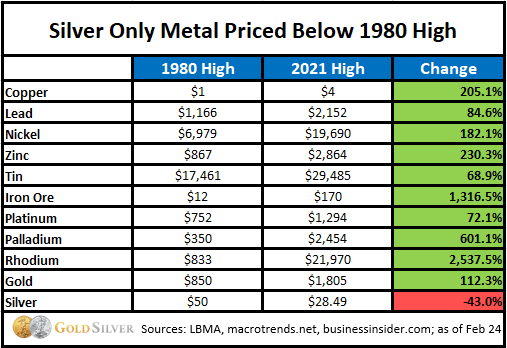 All metals are up double or triple digits (and some quadruple digits). But not silver; it remains 43% below its high of 41 years ago.

And then there’s the stock and real estate markets…

The most dramatic comparison is to Bitcoin.

Since it’s inception- when two pizzas were bought with 10,000 bitcoin—it has risen nearly 1.4 billion percent. It is the largest rise of any asset in history, including the Tulip mania.

Stock market legend Warren Buffett says, Bitcoin has no inherent value and calls it “rat poison.” He believes it”s a speculative bubble that will crash to zero, and is no different than the Tulip craze of 1637. Since all bubbles eventually burst, history says Buffett’s assessment will prove correct.

The message to all this is clear:

So, why are prices so low?

It’s no secret that central banks have been manipulating the price of gold in order to maintain confidence in government issued currency, and to cover real inflation.

In fact, since President Nixon removed gold as backing for our currency in 1971, the U.S. dollar has lost 93% of it’s purchasing power, while gold has increased 58 times in value.

Historically, the average lifespan of a fiat currency is 50 years. So, prudent investors should exchange their rapidly depreciating paper dollars into real money, gold and silver now, to protect their wealth.

Since 2009 the U.S. debt has exploded from $9 to $27 trillion dollars. This has hyperinflated the stock, bond and real estate markets, and created the largest financial bubble in American history. 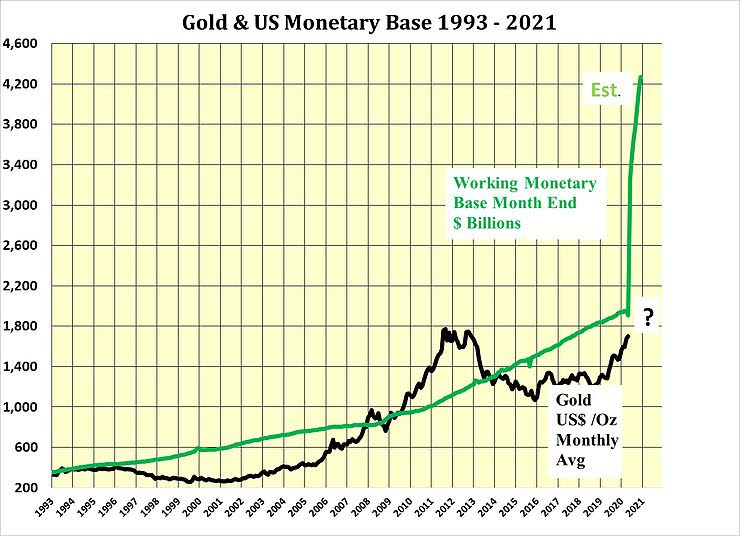 Therefore, if silver was today at its 1980 value, relative to the monetary base, it would be around $1,877 dollars an ounce.

Throughout history, the price of gold has always been revalued to account for new currency issued.

Economist Jim Rickards explains… “Take global M1 money supply and multiply it by 40%, our official gold backing.Then take that number, and divide it by the official amount of gold in the world, which is about 33,245 tons. In the end, you’ll get about $10,000 an ounce.”

Investors and Savers have an incredible opportunity to rebalance their portfolios appropriately. And a second chance for those who didn’t participate in the last rally in both gold and silver.

This brief pullback will be followed by yet another upleg of the historical rally in both gold and silver. In fact, the last time conditions were even close to this good (2008) gold tripled in price and silver soared 500%.

In 2021, the stock market may get cut in half and your money in the bank will lose much of its value… But, Gold provides proven protection against equity market declines, asset bubbles, global economic crisis and currency debasement (inflation)

For 5,000 years gold has been the most sought-after form of asset protection. Providing a safe and predictable way to build & preserve wealth.

Unlike paper investments that can become worthless overnight ( stocks, bonds, currencies ) Gold & Silver have true intrinsic value. They cannot be debased by governments that print paper money at will, making their currency worth less each year.

Don’t wait for the market to crash. Protect your retirement savings with gold and silver. It could be the best financial decision you make.