“Those who fail to learn from history are condemned to repeat it.”
– Winston Churchill.

U. S. Government stimulus and Fed money printing have exploded since 2009… Quadrupling the National debt from $8 trillion to $30 trillion dollars! This has Hyperinflated the stock, bond and real estate market, creating the largest financial bubble in U.S. history.

Fed-fueled asset booms always lead to busts. As government stimulus ends, bull markets that were induced by fed money printing inevitably collapse as all bubbles do.

In fact, the stock, bond & real estate markets are so out of balance with the rest of the economy, that houses are almost double the cost of what they should be. ( Shiller Housing Index) The stock market is also at extreme valuations (PE ratios) According to the Warren Buffett indicator (The ratio of total United States stock market valuation to GDP) Stocks are at record high valuations, more than double their market value. But, this will correct. The free market will equalize this…through either soaring inflation, or the huge deflation of a stock market crash. 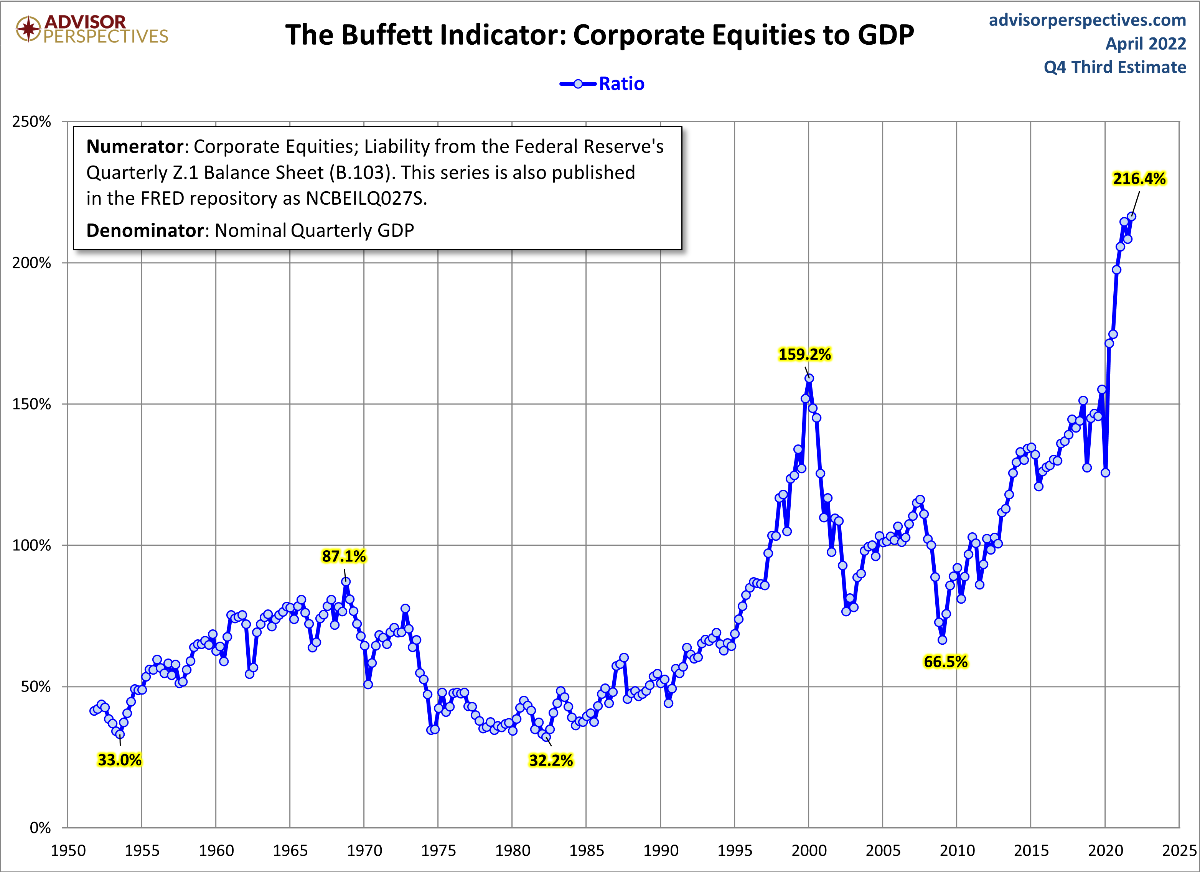 The #1 ranked Aden forecast says, “The stock market just finished its worst quarter since 1939, losing $7 trillion, and this bear market has a lot further to go, it’s still in the early stages.

Despite the recent correction, stocks remain extremely expensive based on the price/ earnings ratio. In fact, stocks are at the second-highest level in a century, going all the way back to 1900. They’re currently even more expensive than they were at the peak in 1929. This tells us stocks are set to fall to much lower levels.”

Wharton business school professor Jeremy Grantham says “The Fed will not be able to prevent, sooner or later, the asset prices coming back down.” So warned the bubble expert on the PBS series Frontline.

Grantham has been warning of a “superbubble” in the U.S. since last year, arguing the S&P 500 is set to be cut in half as an era marked by exceedingly risky investor behavior begins to fade.

Grantham is convinced that we’re in the midst of a fifth great bubble of the modern era, following the Wall Street crash of 1929, the Japanese asset bubble of 1989, the dotcom blowup in 2000, and the Global Financial Crisis of 2008.

It is dangerous to own risk assets such as stocks at artificially inflated valuations. It is especially dangerous to own false safe havens such as bonds, when their yields are so low that they are guaranteed to deliver negative real returns. (inflation )

He warns that both stocks and the housing market have been lifted to unsustainable levels. Owing to speculation from investors and unsustainably loose monetary policies from the Federal Reserve.

Wall Street legend Grantham—who is well known for accurately predicting the housing bubble and subsequent crash of 2008—warned late last year that a “day of reckoning” for the housing market would come. 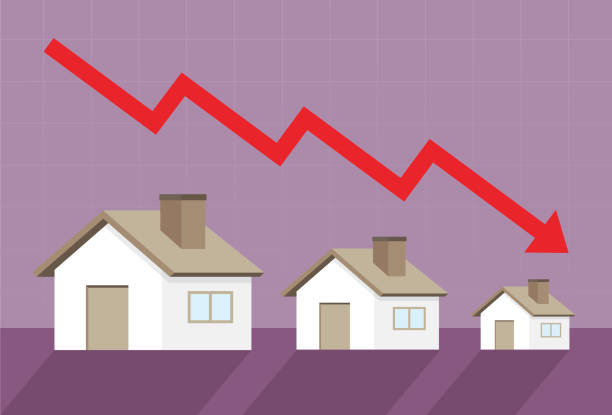 Between a $300 trillion mountain of global debt, highly leveraged speculation, derivatives, and record central bank money printing, there’s no place to turn now for a bail-out.

The $4.6 trillion in Fed money printing in the last two years has created the biggest bubble of all.

Now the reckoning has begun. The global bubbles – in stocks, bonds, and real estate – are now popping.

Excessive money printing from the Federal Reserve has also created the highest inflation in 40 years. Resulting in the most extreme devaluation and destruction of the U.S. dollar in history.

As economist Peter Schiff points out, “The CPI uses a government formula that understates the actual rise in prices. If measured honestly, based on the CPI formula used in the 1970s, inflation is double the official rate, approaching 17% now.”

…And devastates retirement accounts by knocking years off your savings, potentially causing you to outlive your money.

Gold has been the foundation of wealth and a monetary base for centuries. It has maintained value over time better than any other asset on earth. That makes it the best place to store your wealth.

Unlike paper Investments (stocks, bonds and cryptocurrencies) that can become worthless overnight. Gold & silver have true intrinsic value. They can’t be debased by governments who print paper money at will, making their currency worth less every year.

Over the past 20 years, paper money has lost an astonishing 80% of its value compared to gold!

If you haven’t taken steps to protect yourself, your family, and your future with gold – the time-tested asset during monetary crises – we recommend you do so at once.

Gold is the only true safe haven for your investments, and should be a major part of every investors portfolio. It is a necessity for wealth preservation during periods of monetary instability.

Overvalued equity markets, and a monetary system overcome with indebtedness is not a safe place to entrust your financial future.

It takes years to build up a nest egg that will last you through retirement. And it can take just a few weeks to watch it get cut in half during a market crash.

In times of crisis, gold is the safest investment that also has the greatest potential to increase your wealth.

In the inflationary decade of the 1970’s, gold increased 20 times in value, during a time when stocks, bonds and real estate prices were plummeting.

So, repositioning IRA/401K retirement-savings out of risk assets (stocks, bonds & real estate) and dollar-denominated accounts (money markets, CD’s, annuities) into gold now, could be the best financial decision you make.

As gold values continue to rise against a falling dollar. Investors today have a historic opportunity, to use the dollar devaluation to make once in a generation profits, and safely grow their retirement savings with no-risk, in gold & silver.

Classic American gold & silver coins have been a popular method of storing wealth for generations, which is no surprise considering that they have outperformed the S&P 500 for the past 25 years ( PCGS 3000 Index) and appreciate at an average rate of 23% in years where inflation is at least 3%.

For conservative investors who want physical gold that is completely private and offers stronger upside potential than bullion. Classic American gold & silver coins are comparably priced with modern bullion coins, yet have historical and numismatic value that bullion cannot match. They offer the best combination of low price, low premium, fundamental scarcity, and strong track record of leverage to the bullion price. 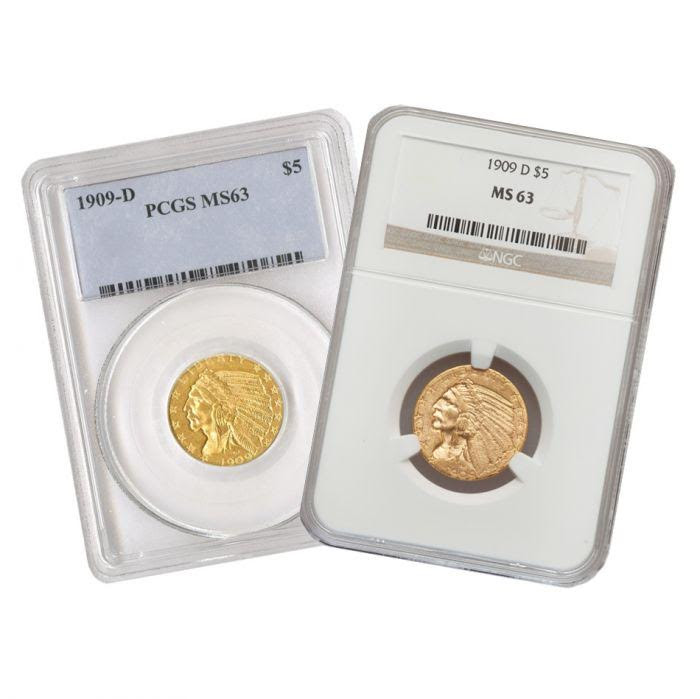 Minted for only 10 years, from 1908 to 1916 and again in 1929, $5 Indians are the second-scarcest of the eight major U.S. gold coin types. Merely 167,000 coins have been certified in all dates, conditions, and mint marks combined!Only the smaller $2.50 Liberty has a lower overall survivor rate. But the $5 Indian is far more popular among collectors and investors because of its short-lived production, unusual incuse design, and larger size.

MS63 $5 Indians have an extremely low survival rate. 100 years ago these coins were minted as needed for currency and spent; they were not hoarded like the larger $10 and $20 gold coins.

Scarcity is what creates price leverage when demand surges, and this coin’s history proves it. 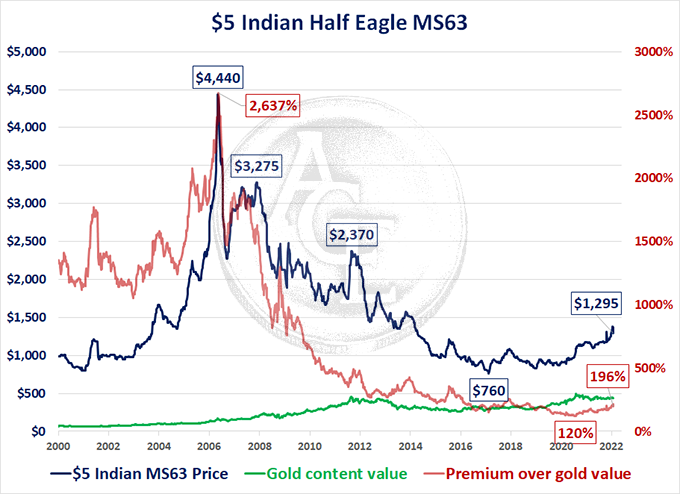 This has created an unprecedented investment opportunity to own historic U.S. gold, and see triple digit gains in the coming months.

We have secured a small number of these classic American rarities, at the lowest price in the nation, with dates that are up to 5 times rarer than the most common dates, offering powerful investment leverage at no extra cost.

These rare historic coins are currently valued at $1,750 (PCGS.com) But, while they last, are making them available at dealer pricing of only $1,395 each, a $350 savings! (limit of 10 coins per customer)

Each coin has been certified by PCGS or NGC. And comes with our exclusive buy back guarantee. Providing unlimited profit potential with no-risk.

Choice MS63 $5 Indian gold Eagles offer precisely the kind of “double play” leverage we look for in classic U.S. gold coins: The proven ability to rise by much more than their underlying gold price, because of fundamental scarcity and restricted supply in the national market.

So, don’t miss the last great buying opportunity, in the worlds cheapest asset, gold. $5 Indians have the potential to appreciate sharply in a rising gold market. Yet they are trading today at remarkably low prices! If premiums revert to historic average, a $13,950 investment ( 10 coins ) becomes $67,500! 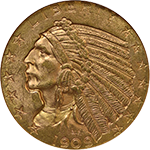 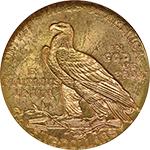 You can invest with confidence. Our guarantee of satisfaction assures each customer of a positive, risk free transaction every time.