Bank of America shocked the financial world with a forecast that gold will rise to $3,000 an ounce within 18 months, a 76% increase from current levels and more than 56% higher than the safe-haven asset’s all-time record high of $1,921.17, set in 2011.And the reason? The U.S. Federal Reserve. The prediction came in a memo to investors called “The Fed Can’t Print Gold,” and it highlights the fact that interest rates are going to remain low in the U.S. and the rest of the world for the foreseeable future in order to try and boost GDP and inflation amid the novel coronavirus pandemic. Additionally, balance sheets will continue to rise, as will government debt loads.

“People are getting worried about the recovery and the Fed printing trillions of dollars. This is driving an increase in allocation towards gold in many portfolios,” he noted. And sees gold climbing to $3,000 an ounce by the end of next year. But, admits that even more gains are possible depending on how bad the currency debasement gets.

“We have the world’s greatest economic collapse in 100 years the world’s biggest central bank money printing in 100 years and the worst social turmoil in a generation. Gold has been a store of value through good times and bad for 5,000 years. It will continue to fulfill that role for generations to come. It isn’t anybody’s liability, like all the central bank-controlled fiat currencies, that can be printed into oblivion. The Fed is going to flood the market with at least 10 trillion dollars and the central bank added more assets in one month than they did in the last century.” 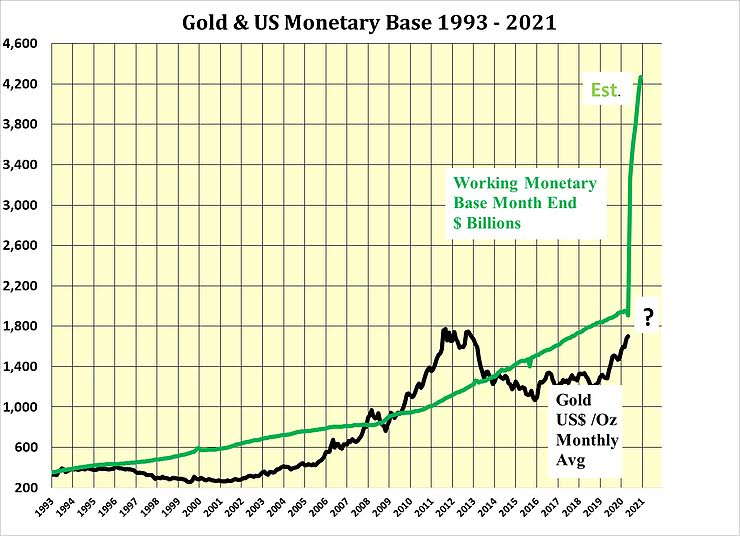 The Federal Reserve is pumping trillions into the economy and embarking on unlimited quantitative easing. This is going to ignite gold and silver. And make the 2008-2011 run up in prices look small in comparison of what is to come.

That’s why economist predict this will drive gold to $5,000 an ounce in the years ahead and ultimately to $10,000 based on the amount of fiat currency central banks have printed.

Throughout history the price of gold has always been revalued to account for the amount of currency in circulation.

“Take global M1 money supply and multiply it by 40%, our official gold backing.Then take that number, and divide it by the official amount of gold in the world, which is about 33,245 tons. In the end, you’ll get about $10,000 an ounce…”

So, a historic realignment of gold prices is coming soon. And the time to prepare is now. The stock market outperformed from 2010 to 2020 – now it is gold’s turn. Below is a breakdown of the recent decades with their preferred assets.

After a 10-year bull market in stocks, the next asset shift is unfolding before our very eyes. That, combined with the 2019 breakout in gold, confirms the next decade heavily favor precious metals and tangible assets. The Dow-to-Gold trade is based on a simple principle.

Over the course of the last 100 years, you would have made only 6 trades. The chart below shows it all. And if you look carefully, you’ll see a recent reversal… 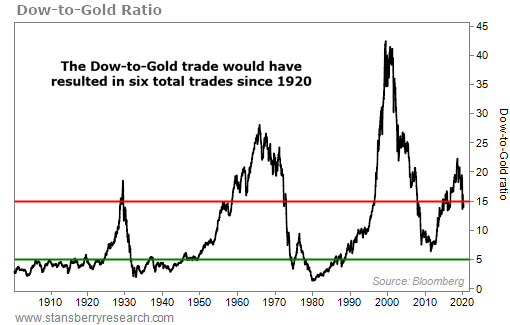 It’s falling again. This is the start of a longer trend… a signal that the system is going to break soon. Maybe it’s starting to break already?

The ratio likes to move in big, clear trends. And once it’s in motion, it tends to stay in motion. And it’s about to head much lower… 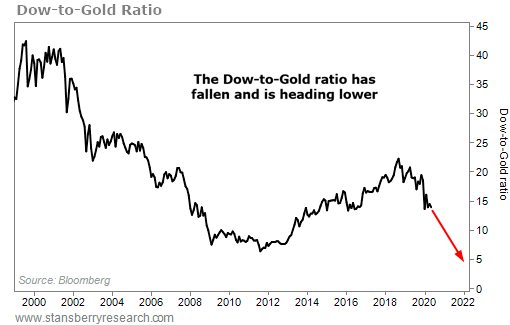 The Dow-to-Gold ratio is now back on its way down… to a level somewhere below 5.

Paul Singer, the hedge-fund billionaire behind Elliott Management, warned that the ultimate path of global stock markets is a drop of at least 50% from February highs.

“The stock market may get cut in half, but this most undervalued asset is about to Surge” the billionaire investor said. “Gold is one of the most undervalued assets available and it’s worth multiples of its current price due to the financial debasement of money by all the worlds central banks.”

This chart shows how disconnected equity prices are from their underlying fundamentals. 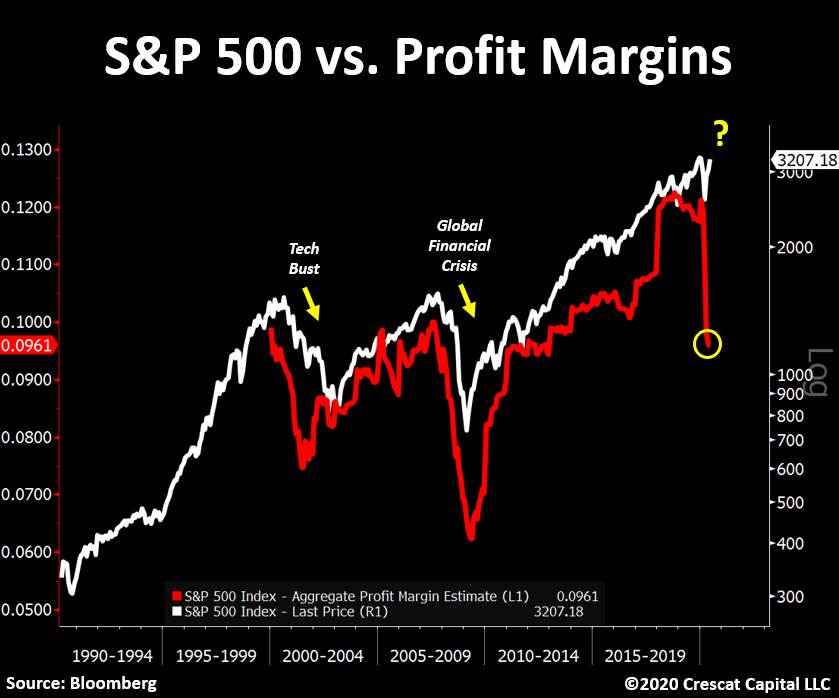 There’s never been a better set-up for getting out of overvalued stocks and into undervalued precious metals.

There have been 3 major Gold bull markets in the last 50 years.

Indeed, since gold became legal for U.S. citizens to own again in 1972. Gold has outperformed stocks, the oil price, real estate, bonds and outpaced inflation by a huge margin. It has clearly been a superior alternative to paper money and continues to be the ultimate safe haven and best performing financial asset. In fact, a $25,000 investment at the beginning of this century ( year 2,000 ) has already grown into $175,000 today.

Overvalued equity markets, and a monetary system overcome with indebtedness, is not a safe place to entrust your financial future. Never forget that anything denominated in dollars (stocks, bonds, CD’s) loses value with each passing month.

So, if you haven’t followed our advice to own physical gold and silver yet, this is your chance to reposition 25% -40% of your retirement savings out of dollar denominated investments into Gold & Silver for profits and protection. And there’s never been a better time.

Alert! Due to the corona-pandemic the IRS has extended the 2019 tax filing date to July 15th 🇺🇸.

So, we’re offering a historic price on Proof Silver American Eagle coins. These are the only limited edition bullion coins approved for IRA retirement accounts. They have both collectible and bullion value and have been a favorite for collectors & investors since 1986, when the U.S. government began minting them. 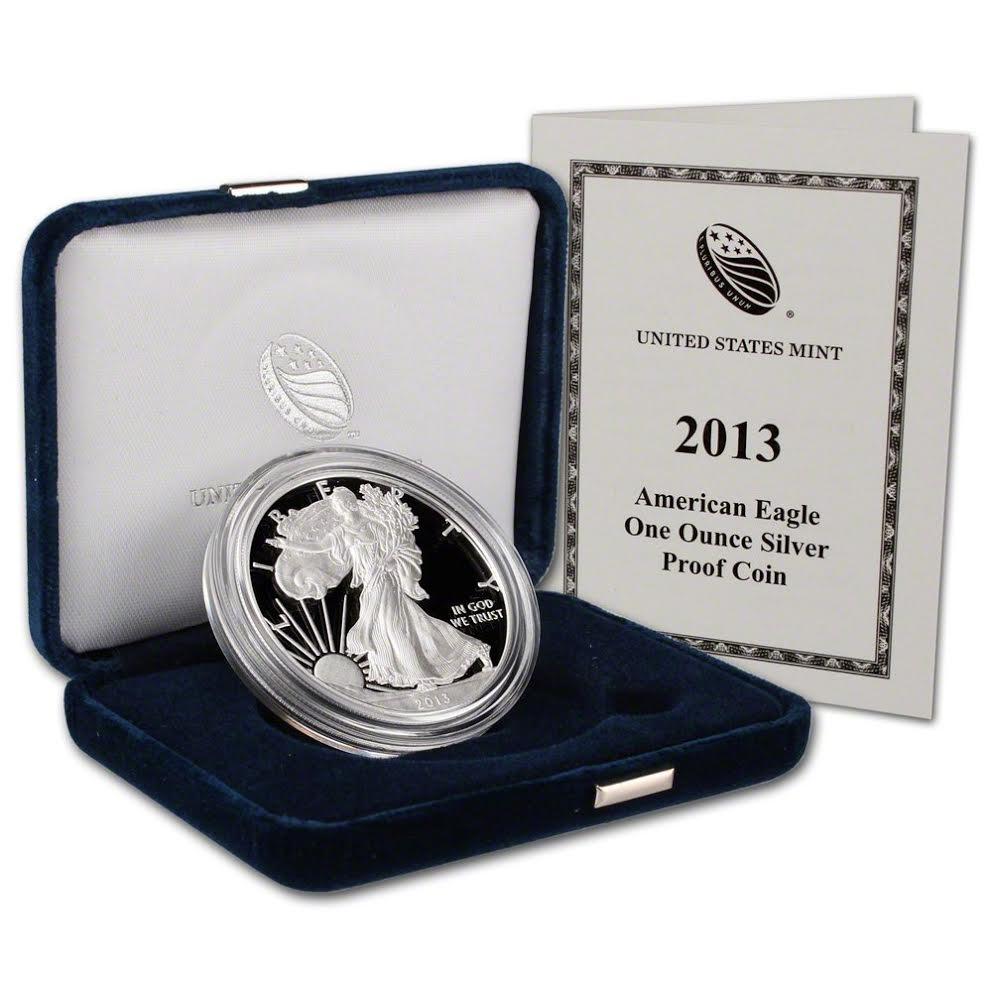 But, our limited quantities will sell out quickly. So, don’t risk disappointment. Call (800) 723-8349 to reserve your proof silver American Eagle coins now, at a historic savings before they sell out. It could be the best investment decision you ever make for your IRA retirement account.

Since 1982 we have helped thousands of Americans protect and grow their assets with tangible investments. For over 35 years, Liberty Financial & affiliates have been the trusted name in wealth management, with over $1 Billion in customer transactions.

We offer safe & predictable ways to…